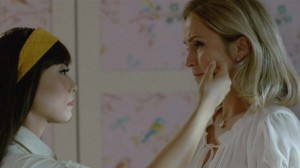 Paper presented at the conference Aesthetics, Ethics and Biopolitics of the Posthuman, Aarhus University, Denmark, 10-11 December 2015

Ever since Pygmalion succeeded in artificially creating the perfect lover, the idea of intimate and sexual relationships between humans and non-humans has become more and more popular, especially in the 20th and 21st century. Increased technological possibilities enable us to create artificial intelligence and interact with it. In literature and film we are confronted with cyborgs, androids, replicants and other posthuman beings almost indistinguishable from humans claiming their rights as sentient beings. They fall in love with humans and humans fall in love with them. But can man’s relationship with machines translate into real-life intimacy? – That was the question I tried to answer in my talk.